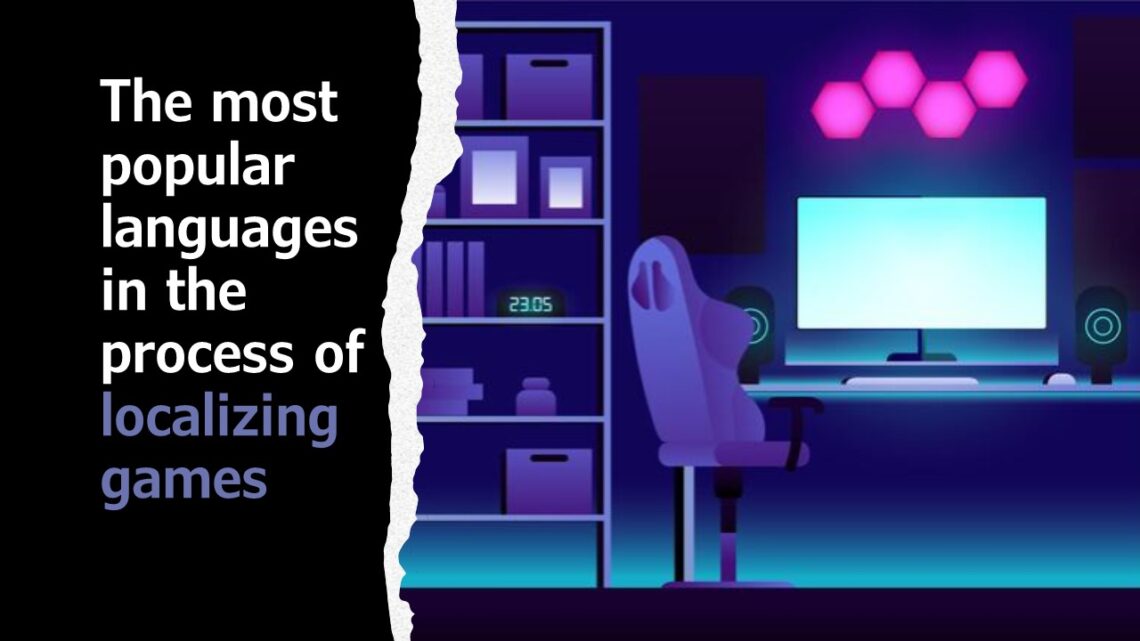 The localization of computer and video games is dynamically developing all over the world. It is with to notice that Poland is one of the biggest game developer in the world. As a result, more and more video games are created in Poland. We know something about it, because as a gamelocalizations.com, we are one of the leaders in the computer game localization industry. Which languages are popular? We decided to check which countries and continents are leading in computer games and into which languages the translation of video games is most often implemented. The word became an action, and here’s the cheat sheet of languages in which it is worth to translate computer games.

The most frequently used language, according to the biggest platform for players, Steam, in 2022 is, rather not surprisingly, English. On the second place is simplified Chinese and the last place on podium is taken by Russian. So much for popular languages to which world producer most often outsource the translation of computer games. In this ranking, there are no bigger surprises. However, the situation is completely different if we look at the statistic, for which continents and markets, localization is the most often realized.

According to the report of the portal Newzoo on a computer games market, the biggest “noise” is made by Asia (over one and a half billion players), with an amazing result 55% of total share. This doesn’t mean that 55% of games are translated into asian languages, because a lot of asian players are still forced to play in their favorite games in English version. It is for sure clear message for game developers on the markets where localizing games is profitable, because the sale potential is counted in billions of players.

It’s appalling that second place have only 15% shares in the market. (About half million players) It is Africa and Middle East regions, which can be surprised for a lot of people. Mostly Saudi Arabia and United Arab Emirates. Europe (over 400 thousand players), which for a lot of gamers and observers seem like a region that should be on a second place, is on the last place of podium with a result of 13%.

Asia a lider in the game localization market?

Starting with the biggest market, which is with no doubts Asian market, during the computer game localization and choosing languages in which we want to localize product, we have to deal with a lot of different languages. However, consumers mostly use three languages that are the most popular amongst the computer game players. It’s for certain simplified chinese, traditional chinese (Hong Kong) and traditional chinese (Taiwan).

These languages are used during translation of the dialogues, different texts and also translation of the quests and items. While translating dialogues between characters or NPC, process of localization goes one step further and mainly chooses Mandarin and Cantonese. Probably the fact that written language is different from the one in dialogues may be confusing, but I explain it right away. It’s actually very simple, but not obvious. Written language is just a bit different than spoken within the same dialect. About 70% of all Chinese can communicate in Mandarin, and the second most used dialogue language is Cantonese.

In African regions and Middle East the most used languages are: Arabic, Turkish, Persian, Hebrew and Urdu. This region is extremely valuable, it gives a wide range of possibilities for people that localize games. Mobile games market, i.e. all phone applications, all kind of games that we installed on our smartphones to pass the time, for example on the go, it is in this region the most successful. Up to 26% of the global market for this type of games is dominated by Africa and Middle East. The market itself can verify how well localized process was done.

The region that is colloquially called MENA hammered people responsible for that. It is without no doubt one of the harder regions if we are talking about localize games, because of cultural differences or slang that can be seen on a daily basis in this part of the world. It is necessary to pay attention to the elements that are culturally perceived as inappropriate for the players. For example, Christmas Theme in Saudi Arabia may be restricted, but in Poland it is a great way to add atmosphere to the game.

Moving on to the European region in the process of localizing games give a wide range of possibilities for people responsible for this process. Multitude of languages in Europe is, of course, caused by immigration population and the fact that in this market, the amount of players is actually similar in these countries.

he most popular languages are: German, French, Spain, Portuguese, Russian, Italy and Polish. You can’t forget about omnipresent English, which is available in almost every game that we find on the market. European region stands out for the fact that we can receive all dialogues translated into another, chosen language. It’s worth to mention that more and more games are localized for immigrant population, i.e. more games are translated in Europe for a languages like Japanese, Simplified Chinese or Korean. Europe is distinguished by very loose cultural restriction if we are talking about localizing games. In this region there is a very little amount of things, that creators want to avoid or hide in discreet way. The bar in freedom of content was set pretty high.

Some of the languages that occurs in this article certainly are a surprise for a great part of readers, but mostly in a positive, not negative way. Multitude of languages is only a proof that developers are watching closely players’ needs and trying to find the best response. Process of localizing games itself is not only good translation of dialogues or items, it’s also adapting the content to the region in terms of culture or customs. Thanks to good working localizing game process, players receive gameplay on the highest level with climate that allows him to immerse in the story and world on the screen.